Potomac Distribution News & Information Blog
Tuesday, March 31, 2009
Yu-Gi-Oh Spellcasters Command In Stock (Just $51!) - Rittenhouse Releases X-Men Wolverine Autograph Pics! The new Yu-Gi-Oh structure decks, Spellcaster's Command have arrived! All pre-orders have been shipped. We have a limited number of boxes left in stock, and they are selling quickly. Boxes are just $51 each.

Rittenhouse Archives has released pictures of some of the key autograph cards in the upcoming X-Men Origins: Wolverine set. Every box will include 2 autograph and/or sketch cards. We are still accepting pre-orders for this set (boxes are $63, cases are $719, and binder cases are $82). Pictured below are Hugh Jackman (Wolverine), Ryan Reynolds (Wade Wilson/Deadpool), Liev Schreiber (Sabretooth), and Taylor Kitsch (Gambit).

Rittenhouse also just released the following sketch card collage. The sketch cards will be based on Wolverine comics - not the X-Men Origins: Wolverine movie. As usual, the inserts in this Rittenhouse set look amazing. 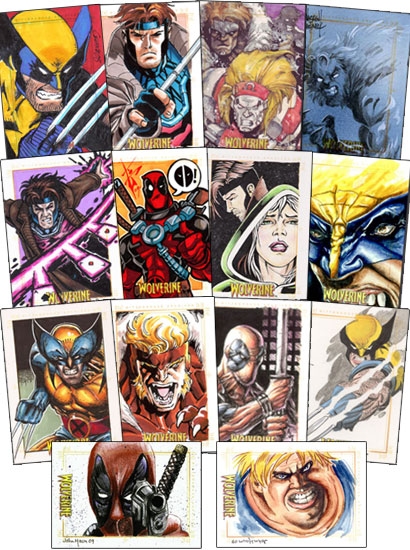 On Friday, April 3rd, we will be raising our box price to $63 and our case price to $719. If you are planning to pre-order any Star Trek Movie cards, please do so by Friday to take advantage of our best prices!  ¶ 5:28 PM 0 Comments

On June 24th, Transformers Revenge of the Fallen will hit theaters! We just picked up some Transformer Movie cards! Topps released these in June 2007 when the first movie came out. Each box includes either one Autograph, Relic, or Sketch card! Boxes are just $36 and sealed 8-box cases are only $279.

Thursday, March 26, 2009
Monsterpocalypse All Your Base On Sale
More Harry Potter Memorable Moments Inserts Announced The next Monsterpocalypse expansion, All Your Base, is due to arrive in July. The new set will introduce new faction Installation buildings and a Morpher monster type (4 small figures that combine in one colossal monster). All six factions - G.U.A.R.D., Terrasaurs, Lords of Cthul, Planet Eaters, Martian Menace, and Shadow Sun Syndicate - receive a new Metamorph monster, 3 new units, and 6 faction-specific installation buildings. Monster booster cases, Unit booster cases, Map Packs, and Strategy Guides are available to pre-order now. 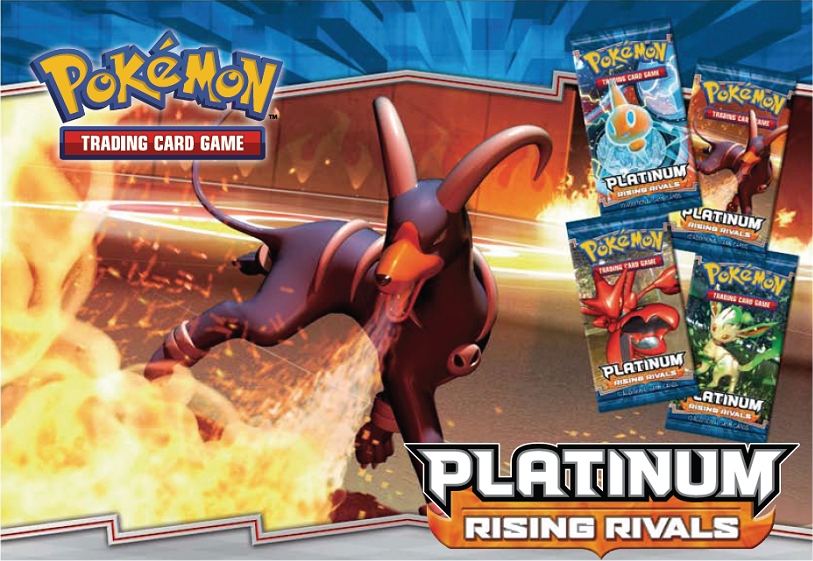 The next Pokemon expansion, Rising Rivals, is on sale now! Rising Rivals is expected to ship by May 21st. The set will include more than 110 cards, with over 40 Pokemon SP (including 6 Pokemon SP LV.X). A subset of 5 different shapes of Pokemon Rotom as well as Pokemon that belong to the Gym Leaders and Elite Four will also be included. Boosters are available for $87, 6-box booster cases are $516, and theme deck boxes are $64.


World of Warcraft Blood of Gladiators has arrived! All pre-orders have been shipped. We have additional boxes available for immediate shipment.

One of our best deals just got better. We now have Yu-Gi-Oh Duelist Genesis boosters in stock for just $35 (previously available for $38). We also expect to have sealed cases in stock within the next few days for just $408!

Customers looking for James Bond Archives will be happy to know that have a small amount of that product available again. Boxes are just $62 each and will ship by Wednesday, March 25th. Rittenhouse is sold out of this product.  ¶ 5:18 PM 0 Comments

Friday, March 20, 2009
Warhammer 40k Restock and Rittenhouse Sale Happy First Day of Spring to Everyone! In Washington, DC today, we enjoyed sunny and 50F degree weather. Not exactly spring-like, but I'm sure 50 degrees feels balmly to some of you in colder climates.

We restocked some Warhammer boosters boxes that we haven't seen in several years. Coronis Campaign ($49), Battle for Pandora Pandora ($49), and the harder to find Battle for Delos V ($78) are all back in stock now.

Here's a list of the inserts and incentive cards available with the new set. This list is not complete but includes all of the information we've been given thus far.

Monday, March 16, 2009
Pirates Pocketmodels Restock Arrives - Spock Signing For New Star Trek Set - Harry Potter Memorable Moments 2 Price Increase Coming & More! Argh! We recently received a shipment of WizKids' Pirates Customizable Strategy/Pocketmodel Game. We haven't had some of these products in stock before, and we even have a couple of complete sets available now.

More good news arrived from Rittenhouse Archives late this afternoon. Zachary Quinto, who will be playing Spock in the upcoming Star Trek film, has agreed to sign autographs for the new Star Trek Movie trading cards set. With the recent addition of Chris Pine (Kirk), the autograph lineup for this set is looking great!

The newest Game of Thrones chapter pack is expected to arrive tomorrow. Scattered Armies is available individually for $9 or by the 6-pack for $44.  ¶ 4:47 PM 1 Comments

Friday, March 13, 2009
Garbage Pail Kids & Wacky Pack Restock - Highlander Season 3 On Sale - New Cthulhu Asylum Pack On The Way We received a shipment of Wacky Packages and Garbage Pail Kids trading cards today that included a number of items we haven't had for awhile. We think you will like the great prices we are able to offer on these products. Here's what just arrived:


The next Highlander trading card game expansion is scheduled to release in late April, and we are now taking pre-orders. Season 3 will be sold in boosters and starters.

The next Call of Cthulhu asylum pack should be arriving on Monday or Tuesday! Antediluvian Dreams asylum packs are available individually for $9 or in 6-packs for $44.  ¶ 5:13 PM 0 Comments

Glory of the Empire is back! We just received a shipment of L5R Glory of the Empire boosters today. This product was out of stock at the manufacturer for more than a month, but it is available again. Boxes are $99 each. We also have starters in stock for $45.

UFS fans should be aware of several new developments. Set 12, which includes the Soul Calibur IV Tower of Souls expansion as well as the first Shadowar release, is now expected to arrive in April. We had originally been told that these products would arrive this month.

We also now know for sure that starters will be made for both the Tower of Souls and Shadowar sets. For awhile we weren't sure whether starters were going to be produced.

Some of you may have already heard, but Fantasy Flight recently announced that it had reached an agreement to add Tekken 6 characters to the UFS game. The Tekken 6 characters will be introduced in Set 13, which is expected in June.  ¶ 3:37 PM 0 Comments

Wednesday, March 11, 2009
Yu-Gi-Oh Raging Battle On Sale - Chris Pine (Kirk) Signing For Star Trek Movie Set No game is hotter at the moment than Yu-Gi-Oh! And Konami has announced plans to release its next expansion, Raging Battle in May. The new set introduces Koa’ki Meiru and Earthbound Immortal cards and features Blackwing monsters, plenty of plant-type cards, and new Synchro Monsters including Leo's Power Tool Dragon. Raging Battle is expected to ship on May 12th. Boosters are just $58 and sealed cases (12 boxes) are only $689!

We just found out from Rittenhouse a few minutes ago that Chris Pine who plays Captain Kirk in the upcoming Star Trek film is signing autographs for the new Star Trek Movie trading card set. This set is selling very well, and with this news, we expect sales to pick up even more. So, if you are planning to order with us, please do so soon!  ¶ 5:41 PM 0 Comments

We are now accepting pre-orders for Yu-Gi-Oh Crimson Crisis Special Edition boxes. Each pack (pictured) includes 3 Crimson Crisis booster packs and 1 of 2 Super Rare variant cards (Necroface or Goblin Zombie). There are 10 packs per box. We expect to ship this product by April 9th.

Friday, March 6, 2009
Naruto Fateful Reunion/Titanic/Magic Theme restocks We have started taking pre-orders for Fateful Reunion, the next Naruto release. We expect it to be released in early May. We are preselling booster boxes ($58), 6-box booster cases ($342), and theme deck boxes ($52).

Today's restocks include Titanic factory sets by Inkworks. We sold out of this item several years ago at $57. We were lucky to restock at a much lower price and can now offer them to you for just $19 each. Also, Mirrodin theme deck boxes ($51) and Saviors of Kamigawa theme deck boxes ($38) are back in stock. Both of these sold in the $70-$80 range when they were first released.

Enjoy your weekend! We are expecting spring-like weather here in Washington DC. It will be welcome relief after a very cold and snowy start to our week.  ¶ 4:15 PM 0 Comments

Thursday, March 5, 2009
New Harry Potter and Lower Future Sight/Judgment Prices We just received pre-order information for Artbox's Harry Potter Memorable Moments Series 2. Due in April, we are now preselling boxes for $57 and 10-box cases for $559. The boxes will including randomly inserted prop, costume, and autograph cards including autographs from new signers that have never been included in previous sets. The new signers include Robbie Jarvis as young James Potter, Richard Leaf as Auror Dawlish, and Tolga Safer as Igor Karkaroff's aide.

Speaking of Harry Potter, we have restocked Order of the Phoenix hobby boxes ($65) and Prisoner of Azkaban Update hobby boxes ($52).

Today, we lowered our prices for Magic: Future Sight booster boxes ($88 from $91) and Magic: Judgment booster boxes ($93 from $104). One of our goals is to continually lower our prices as much as we can. When we are able to buy from our suppliers at a lower price, we pass that savings along to you, our customer.  ¶ 4:39 PM 0 Comments

White Wolf has announced plans to release its next Vampire: The Eternal Struggle expansion in June. Ebony Kingdom will include 60 cards and will be released only in boosters.  ¶ 4:54 PM 0 Comments

We just received a shipment of World of Warcraft Deck Protectors. We have cases available for just $99 (50 packs). Each case includes 23 Alliance packs, 23 Horde packs, and 4 Neutral packs. Each pack includes 75 protectors and a UDE point card. Half cases are $75.

The new Epic Trading Card Game also just arrived. We have booster boxes in stock for $54 each.  ¶ 4:59 PM 0 Comments