Buy any of these booster boxes for just $49!

If you haven't placed your pre-order yet, it isn't too late. We have a small number of cases still available for $176. Each case includes 12 tins (6 Shooting Star Dragon tins and 6 Red Nova Dragon tins).

The set will feature Wolverine, Thor, and Elektra. There are 27 cards in the set (9 for each character) with amazing artwork on the front and back of each card.

Each set is sequentially numbered from 1 to 1939 to commemorate the birth of Marvel Comics in 1939.

The World of Warcraft Worldbreaker expansion is expected to ship by November 17th!

Worldbreaker includes content from the Cataclysm expansion for the World of Warcraft Online Game. The set includes the first Goblin and Worgen heroes and allies, new race/class combos like Dwarf Shaman and Tauren Paladin, Dragon master heroes like Alexstrasza and Ysera, and Heirloom gear with its own unique mechanic.

Also, don't forget that the new Icecrown Epic Collection releases this Friday, October 29th! We are pre-selling boxes for $27 each. 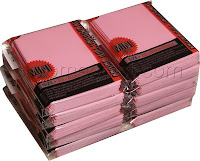 We also have standard size KMC Matte Brown cases back in stock for $129.

Board Games Back In Stock!

We recently received several board game shipments. We've carried board games in the past, but a period of time had passed since we last stocked them.

We have a number of the most popular games in stock now, including Thunderstone, Tide of Iron, Ticket to Ride, Small World, and many more. Click here to check out our selection of board games.

Don't see the board game you've been looking for on our list? Email us at sales@potomacdist.com and we'll let you know if we can get it for you!  ¶ 4:17 PM 1 Comments

If you want to see a list of the autographs, props, and costumes that have already been announced, check out yesterday's blog post here.

Please note that Artbox's order deadline is less than two weeks away! So please place your order as soon as possible to avoid missing out on this set.

Rittenhouse Archives announced this morning that it has delayed the release of both the Stargate Universe Season One and Star Trek: The Remastered Original Series sets.

Star Trek: The Remastered Original Series was originally slated to release on December 15th. It is now expected to ship on January 26th. Each box includes 1 Dual and 1 Single Autograph card!

Each case includes a Doomsday Machine Lenticular card. Case incentives include ustomers a Nichelle Nichols Autograph card from "Mirror, Mirror" (3 cases), a free Leonard Nimoy (Spock/Yellow Uniform) Autograph card from "Where No Man Has Gone Before" (6 cases), and an archive box (15 cases)

Artbox Entertainment just sent us some initial details on its upcoming Harry Potter and the Deathly Hallows Part One trading card set. It looks like Artbox plans to release the set just before Thanksgiving.

We will post more details as soon as we receive them.

If you are interested in receiving an email when this set goes on sale, simply click here and submit your email address!  ¶ 11:18 AM 0 Comments 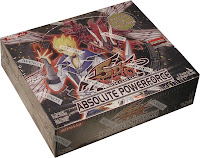 We just received a shipment of Yu-Gi-Oh Absolute Powerforce boosters.

We'd been sold out of this popular box for most of this week, but we have them available now for $67.
Click here to order.

Looking for a Yu-Gi-Oh box, but can't find it on our site? Drop us an email at sales@potomacdist.com and we'll see if we can find it for you!  ¶ 10:52 AM 0 Comments

The latest Warhammer Invasion battle pack, Redemption of a Mage, is scheduled to arrive tomorrow.

Each pack includes 60 fixed cards (3 copies each of 20 never-before-seen cards). This is the fourth battle pack for The Enemy Cycle expansion.

Individual Redemption of a Mage packs are available for $13. Six-packs are just $66. 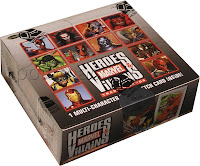 Every box includes 1 hand-drawn, two-character, color sketch card! We have boxes available for $62.
If you are interested in purchasing a case email us at sales@potomacdist.com. Rittenhouse had a small number of cases left earlier this week.

Naruto Path of Pain is expected to arrive on November 5th.

Path of Pain introduces over 100 new cards to the Naruto CCG. The set chronicles the introduction of Pain and the different bodies of Pain such as Animal Path, Deva Path, and Preta Path. Deidara and his various Jutsus also make an appearance in the set. A new mechanic called "Sacrifice" creates new decks for experienced Naruto players. Each pack includes 10 cards - 1 Holographic Foil card, 1 rainbow-stamped rare card, 2 uncommon cards, and 6 common cards. Super-Rare Gold-Holographic Foil Inserts are found 1:6 packs on average. Starter decks include 30 cards, plus 2 booster packs, and a play mat.

Konami has announced two case toppers to be included in Starstrike Blast booster cases! Each case will include one of the two cards - Dance Princess of the Ice Barrier or Shooting Star Dragon. Click the image to get a closer look.

Place your order for Pokemon HS Triumphant by Friday, October 15, and save! On Friday we will raise booster boxes from $86 to $87 and booster cases from $506 to $512. We also have Triumphant starter deck boxes available for $68 each.

Triumphant includes new Pokemon Legends - Darkrai with Cresselia and Palkia with Dialga. The set also includes 8 Pokemon Prime, including Gengar and Machamp, as well as new trainer, supporter, stadium, and holographic parallel cards. There are more than 100 cards in the set.

The release of Rittenhouse's Marvel Heroes and Villains trading card set is right around the corner! We expect to ship pre-orders early next week. Every box will include a hand-drawn, two-character, color sketch card from one of more than 80 artists.

Every set includes the following:

All this content is packaged in a reusable Egyptian-style 3-ring binder for storing and showing off a Duelist’s collection!

The next Warlord 4th Ediiton expansion, City of Gold, will begin making its way to North America soon! Phoenix Interactive is releasing City of Gold in parts, and the first two Adventure Path Sets, The Sleeper and The Storm Awakens are expected to arrive by the end of the month.

The remaining five City of Gold sets will be released in pairs every two months, with a treasure-chest style set rumored to accompany the final set.

We are selling The Sleeper and The Storm Awakens sets for $13 each, or $23 per pair.