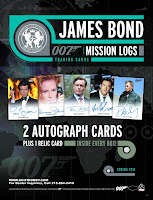 Rittenhouse Archives announced a number of new autograph signers today for its upcoming James Bond: Mission Logs set! There are 2 autographs and 1 relic card in every box!

The new signers include...

Andreas Wisniewski (Necros in The Living Daylights)
Daniel Benzali (W.G. Howe in A View To A Kill)
Valerie Leon (Hotel Receptionist in The Spy Who Loved Me)
Fernando Guillen Cuervo (Chief of Police in Quantum of Solace)
Colin Salmon (Robinson in Die Another Day)
Samantha Bond (Moneypenny in Die Another Day)
Eunice Gayson (Sylvia Trench in From Russia With Love)
Aleta Morrison (Flying Circus Pilot in Goldfinger)
Shane Rimmer (Commander Carter in The Spy Who Loved Me)
Geoffrey Palmer (Admiral Roebuck in Tomorrow Never Dies)
Gabriele Ferzetti (Draco in On Her Majesty's Secret Service)
Kenneth Tsang (General Moon in Die Another Day)
Martine Beswicke (Zora in From Russia With Love)
Burt Kwouk (Spectre in You Only Live Twice)

James Bond: Mission Logs are available for $61 per box or $709 per case (12 boxes) through next Tuesday, April 5th. We will be raising our prices to $62/box and $719/case on Wednesday, April 6th. Place your order today to receive our lowest prices!

Rittenhouse Archives just gave us the details on its upcoming Stargate Universe: Season Two trading card set! The set will be released in the "Premium Pack Box" format that Rittenhouse introduced recently with Spartacus and Lost Relics.

Each Lost Sanctuary Structure Deck includes 37 common cards, 2 super rare cards, 1 ultra rare card, a rulebook, a game mat, and a dueling guide. Lost Sanctuary structure decks give Duelists control over the embodiments of the planets Mercury, Venus, Earth, Mars, Jupiter, Saturn, and the sun itself. These mighty monsters key off of special celestial cards like The Sanctuary in the Sky and Divine Punishment. 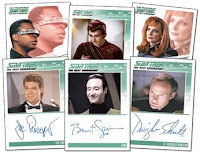 We are now accepting pre-orders for Rittenhouse Archives' upcoming The Complete Star Trek: The Next Generation Series 1 (1987-1991) trading cards. Every box will include 4 autograph cards!

We recently began accepting pre-orders for two new Legend of the Five Rings products from AEG. The next L5R expansion, Before the Dawn, is expected to arrive in May. It is the first expansion that is legal with the upcoming Emperor Edition (the new base set releasing in Fall 2011). There are 156 new cards in the set, the final chapter of the Empire's fight against the armies of the champion of evil - Kali-Ma the Destroyer. 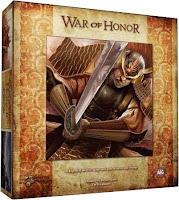 War of Honor is a game of strategies and tactices for 2 to 4 players. The game brings a whole new dimension and dynamic to multiplayer L5R and is suitable for play with cards from the existing arc or older card collections. Players form and dissolve alliances, engage in political maneuverings, and wage mighty battles to determine which clan will triumph.

War of Honor includes 4 Clan decks (Dragon, Lion, Phoenix, and Scorpion), a scoring board, markers, and movable tiles that give a different game play experience every time. Tiles for each of the other five Great Clans are included, making War of Honor fully expandable with your existing L5R card collection. The game can be played with more than 4 players if customized using L5R cards from your collection.

War of Honor is available for $44 individually or $169 per 4-box case. It is expected to arrive in June.

We've just begun taking pre-orders for the next Yu-Gi-Oh expansion, Extreme Victory. The new set is due out on May 10th.

Booster boxes are available for $59 each. Booster cases (12 boxes) are available for $679. We are encouraging our Yu-Gi-Oh customers to get their orders in early, as Konami has sold out of nearly every recent Yu-Gi-oh product very quickly.

Extreme Victory takes Synchro Monsters to their ultimate extreme, with the new T.G. (Tech Genus) Monsters. T.G. Decks are specially designed to crank out Synchro Monsters at a fast and furious pace, and they can do it over and over again. But Duelists can also put the smackdown on Synchro Monsters once and for all! Meklords are a vast array of hungry machines. When they see a Synchro Monster, they simply devour it - and use its powers for themselves. This set also includes new cards for many popular championship decks, including Gladiator Beasts, Blackwings, Six Samurai, and more. There are 100 cards in the set (48 commons, 20 rares, 14 super rares, 10 ultra rares, and 8 secret rares).

Yu-Gi-Oh Dragunity Legion Structure Decks are expected to arrive on Tuesday, March 8th! Almost every recent Yu-Gi-Oh product has sold out quickly, so don't miss out!

Rittenhouse Archives has just released the details of its upcoming James Bond: Mission Logs trading card set! Every box will include 2 autograph cards and 1 relic card! Pierce Brosnan and Daniel Craig will be signing for this set!

The base set includes 63 cards featuring the action and excitement of all 22 classic James Bond films from Dr. No to Quantum of Solace!

Lost Relics will be a premium pack product, similar to Spartacus Blood and Sand. Each box will include 15 packs, each of which contain 4 cards - 3 Relic cards and 1 Autograph card! Only 250 boxes will be produced!

Boxes are available for $538 each.

There are are more than 30 Relic cards in the set, each sequentially numbered to 350, with materials worn by at least 30 different characters including:

There are 8 different autographs, signed by:

As a bonus, each box will include a Relic Card featuring an authentic piece of the Oceanic Airlines Flight 815 airplane fuselage wreckage, sequentially numbered to 300!