Every box will include a hand-drawn, two-character, color sketch card.

Set highlights include:
We are pre-selling Marvel Heroes & Villains boxes for $61. Cases (12 boxes) are just $709. Binder cases (4 binders) are $82. Click here to place your order! 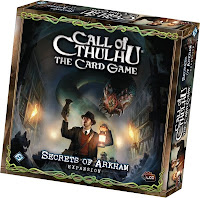 The newest addition to the Call of Cthulhu Living Card Game, Secrets of Arkham has arrived!

The Secrets of Arkham Expansion is a 110-card set. There are 100 cards (2 copies of 50 different cards) that include 6 unique cards for each faction and 8 neutral cards. Among these are Azathoth, Professor Armitage, the Necronomicon, new cards, and old favorites. There is also a 10-card story deck included that can be used in place of the story deck found in the Call of Cthulhu Core Set. With this set, new tribal synergy deck options are opened up through additional support for the Deep One, Mi-Go, and other subtypes, as well as the Day and Night mechanic. The set also introduces neutral cards like Diseased Sewer Rats and Feint that are indispensable in the new metagame.

Click here to place an order for Secrets of Arkham. 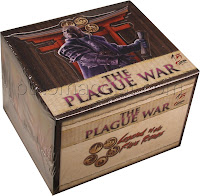 The Plague War is coming soon! It's not too late to place your pre-order for the newest Legend of the Five Rings expansion if you haven't already.